Too Tiny To Fail!

I was climbing Ellie Memorial Buttress on the East face of Table Rock North Carolina, a neglected 5.10 mixed line that is currently being overtaken by lichen.  It had rained earlier that morning and each piece of lichen I stepped on felt like a slimy snot booger under my climbing shoe. I had gotten through all the 5.10 moves, and was now making my way up through what seemed to be nearly unprotectable 5.7 slab moves. The lichen was getting thicker and my anxiety was increasing. I looked down to see my last piece of good pro 20ish feet below me.

I began scanning the rock for gear placements but could only find super shallow flared cracks and a few small horizontals. I placed two Metolius double-zero TCU’s in a thin crack, then linked them together with a sling, forming a magic-x I clipped my rope in. I now had something that I could surely sit on, but I still felt anxious about these two pieces catching a lead fall.

A few feet later I found a solid #1 placement in a better then parallel crack. I placed the cam and immediately felt a rush of relief.

After that day I began to wonder, what is it about big gear that makes us feel so much more secure? I know placing a #3 or #4 feels way better than even a #0.5, but does the size of the cam really matter?

The outward force is important because it dictates the frictional force, which really is what generates the holding strength of the cam. The surface area is important because it dictates the “shear stress” at the contact point. If you don’t know what shear stress is, just think about how the skin on your knees feel next time you jam it into an off width. The shear stress is like the pain you feel as your skin tries to rip off, and the friction force is what’s keeping the other half of your skin attached to the rock.

There are a lot of other things outside of the cam designers’ control, such as the contours, or quality of the rock, which are not always conducive to good gear placements, but that’s a topic for another blog. In this blog, I want to talk about how the camming angle effects the forces on the rock and why bigger gear isn’t necessarily stronger. 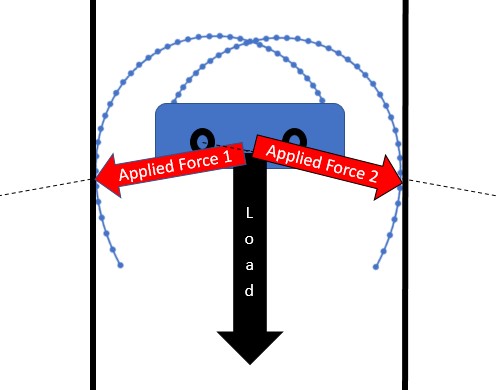 Let’s start by looking at the forces generated by a load on the cam. When you load the cam, a force is transmitted through the cam lobes to the rock. In Figure 1, we show that force as Applied Force 1 and Applied Force 2. Notice the force starts at the cam axle and goes to where the cam contacts the rock, which is just below the cam axle. 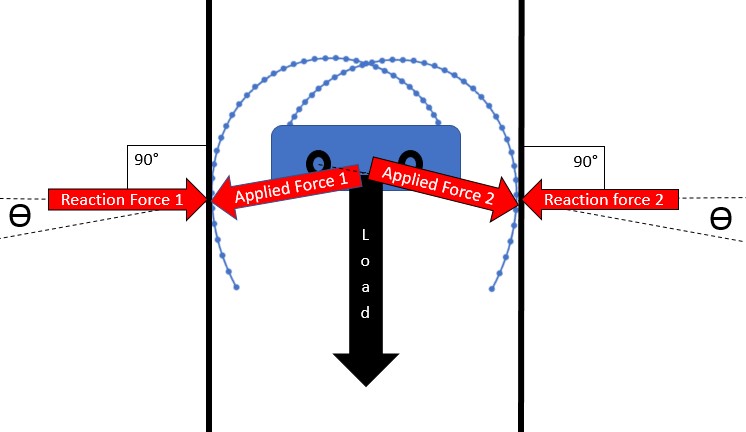 This is where the magic of the cam design happens. Theta can be thought of as the camming angle, and for cams that follow the principle of a logarithmic circle, theta is set as a constant. Meaning, no matter how over cammed or under cammed with the rock the cam is, the angle between the applied force and the reaction force stays the same.

You know what else is cool? Theta is not dependent on the cam size. Little cams and big cams generally use the same camming angle, theta. You can really visualize this by looking at the Omega Pacific Link cam. Essentially three cams in one, we see they all start from the same shape, and have the same profile throughout the entire camming range.

So, what does this mean? Little cams can generate the same amount of holding force as big cams. That’s right -- as long as you are not exceeding the structural limitations of the cam, which should be considered for cams rated less than 5 KN then, that little cam is just as good as any big cam.

Of course, placing cams properly requires more thought then that. In my next blog we will look at why cams don’t hold well in flared cracks, and what do people mean when they say better than parallel. But, for now rest comfortably knowing your #0.5 offers you just as much holding strength as your #3.

Want to read more about camming angles? Check out how Phillip Anuta derives the relationship bettween the cam angle and the coefficient of friction to be µ ≥ tanφ. A link to his senior thesis here